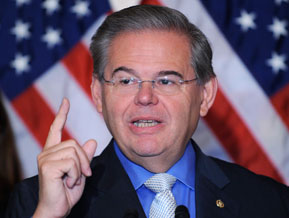 ISRAEL MATZAV
Sunday, June 17, 2012
44 Senators - nearly half the Senate - signed a letter to President Obama sponsored by Senators Robert Menendez (D-NJ, pictured) and Roy Blunt (R-Mo) urging President Obama to cut off talks with Iran unless three specific concessions are made by Iran in Monday's session in Moscow.


"It is past time for the Iranians to take the concrete steps that would reassure the world that their nuclear program is, as they claim, exclusively peaceful," wrote 44 senators in a Friday bipartisan letter organized by Sens. Robert Menendez (D-NJ) and Roy Blunt (R-MO). "Absent these steps, we must conclude that Tehran is using the talks as a cover to buy time as it continues to advance toward nuclear weapons capability. We know that you share our conviction that allowing Iran to gain this capability is unacceptable."

"We understand that this was the very proposal that the P5+1 advanced during the Baghdad meeting," the senators wrote, referring to the permanent five members of the U.N. Security Council plus Germany. "Were Iran to agree to and verifiably implement these steps, this would demonstrate a level of commitment by Iran to the process and could justify continued discussions beyond the meeting in Moscow."

Few expect the Moscow meeting to yield unilateral steps by Iran of the nature sought by the senators.

The senators urge the president not to ease or delay the embargo, writing that only when the Iranian government believes the sanctions are to be "unremitting and crippling" will a diplomatic breakthrough will be possible.

"On the other hand, if the sessions in Moscow produce no substantive agreement, we urge you to reevaluate the utility of further talks at this time and instead focus on significantly increasing the pressure on the Iranian government through sanctions and making clear that a credible military option exists," they wrote. "As you have rightly noted, ‘the window for diplomacy is closing.' Iran's leaders must realize that you mean precisely that."

I'm going to embed the letter below, because when I saw this, my reaction was that there are 41 Republican Senators, plus Joe Lieberman, and they got two Democrats to sign on. But if you look at the signatures, you will see that is not the case, and in fact there are 24 Democrats plus Liberman signed on. I suspect strongly that many Republicans were not even asked to sign because they really wanted it to be a balanced letter. More after the embed.

If that wasn't clear enough, there's this:

"The message of this letter is that Congress' patience is running out when it comes to meetings that don't yield results," said a senior Senate aide. "The Iranians have been given every last opportunity to demonstrate their good faith and step back from the brink. Instead, they keep pushing forward with their nuclear program, and we keep asking for yet another round of talks. This is not sustainable."

It's not. And it's time for Congress to try to force the President to behave as if there's something more important than the timing of his reelection campaign. 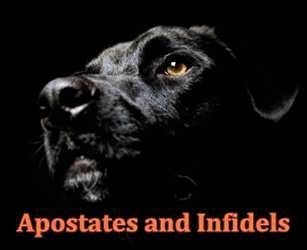